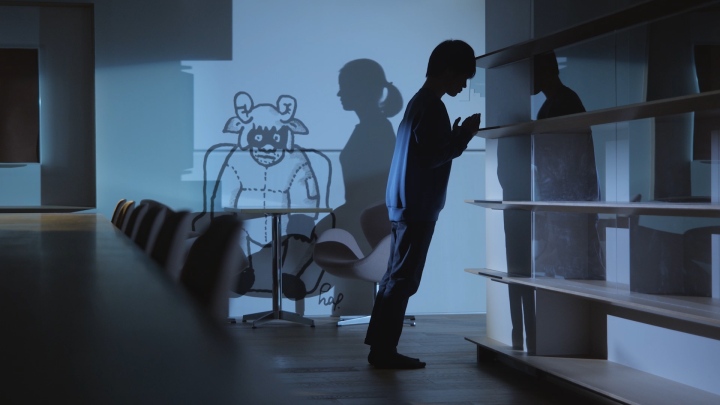 Some time ago, cinematographer Takahashi Tetsuya suggested that I should explore the work of filmmaker Shichiri Kei, with whom he has often worked (1). Films such as Once Upon a Dream (2007/2016) and Necktie (2019) immediately fascinated me. I am therefore very happy that I have had an opportunity to watch the new short film by Shichiri-san, Explore Your Story, Speak Your Heart (Japan, 2021). An image film produced by the Waseda International House of Literature (WIHL), informally known as The Haruki Murakami Library (2), it is a real pearl and goes far beyond the mere self-presentation of a prestigious institution. Taking as its title the motto of the WIHL’s Opening International Symposium to be held on 20 November 2021, Explore Your Story, Speak Your Heart is a quest for the very essence, the heart so to speak, of the reading experience and establishes close links with the work of the famous Japanese author.
The film starts with shots taken outside the Haruki Murakami Library, with the focus on the sinuous framework wrapped around part of the building’s otherwise sober architecture. Rapid piano music accompanies shots of its undulating pattern before the interior of the library is revealed via a series of dissolves. The music that follows is softer and more reflective and a grand piano appears in the image, as if connecting image and sound. A young woman seems intrigued by several small white statuettes representing people reading a book and positioned on bookshelves.
Suddenly the lights go off, inviting the viewer to follow the camera into a realm of fantasy, where images of geometrical forms – empty shelves and the library’s staircase – appear and are invaded by shadows. Repeating the undulating pattern of the construction outside the building, they form part of their own mysterious space. The subtle interplay of light and shade creates a dense, unsettling atmosphere that challenges the first shots, filmed in broad daylight. A young man, who was earlier sitting at the foot of the staircase reading a book, is now a mere silhouette taking on the various poses of the statuettes, while the shadow of a woman appears in the dimly lit room. Piano music underscores the flow of the images, their smooth movements heightened by dissolves. The slow and graceful movements performed by the woman, who is no more than a phantom-like projection, a shadow cast on the walls and the shelves, contribute to the elegance of the floating, dreamlike movements created by the camera and the editing.
This crucial sequence, roughly in the middle of a film lasting barely three minutes, is its core and a reference to the experience of reading as an experience giving access to a different reality. The young man, still a mere silhouette, has now fallen asleep, thus linking the images to a dream situation and to an imaginary and secretive world about which Shichiri gives no further clues. His film is highly evocative and atmospheric and as mysterious as Murakami Haruki’s novels and short stories.
Explore Your Story, Speak Your heart reminded me of Murakami’s novella for children “The Strange Library” (1983), in which a boy is imprisoned in a nightmarish library where he encounters a number of strange people, including a voiceless girl. In the film however, the library at night does not seem particularly frightening. At one point, the young man has fallen down the stairs after being touched by the female silhouette. Looking at him, the woman makes a gesture that suggests grief, a brief emotion expressed when she covers her face with her hands. This relatively long sequence recreates via images something that Murakami wrote in his story: “Beyond the inner door was a shadowy corridor lit by a single flickering bulb.” This is where in the story the door opens into the realm of imagination, and in the film, the transition from the real to the imaginary world is revealed by the library itself, which seems to take on a life of its own. Shichiri visualizes moments of inner life, and Murakami addresses such moments throughout his work, with dreams and mystery playing an important role.
Shichiri-san told me that he was also inspired by Murakami’s letter of acceptance for the Hans Christian Andersen Prize, which he received in 2020, a letter in which he refers to Andersen’s fairy tale “The Shadow”, about a man who loses his shadow, which then becomes independent and falls in love with a princess… This is just one of what are certainly many sources of inspiration that could be identified for the film. Far more important is that Shichiri invites us to explore the unknown with him, experiencing it not only with our minds but with all our senses.
At the end of the film, Shichiri returns to the busy library in daylight – the reading room, the shelves, the piano (another hint to Murakami, in whose work music plays a vital role), the exterior of the building. This building is a place where different realities converge, and it is Shichiri who reveals them through image and sound. Not unlike Murakami’s writing, Shichiri’s filming mediates between dreams and thoughts – thoughts that his unconventional approach tries to encourage in the viewer. Both Shichiri and Murakami challenge the boundaries between interior and exterior reality, between the mind and the material world. And both the writer and the filmmaker imply that the distinction between what is real and what is not might be a question that simply does not matter.

1.Takahashi Tetsuya is also the cinematographer of Explore Your Story, Speak Your Heart.
2.The Waseda International House of Literature, established on the campus of Tokyo’s prestigious Waseda University, was opened to the public on 1 October 2021. Architect Kuma Kengo remodelled an existing university building into one that reflects the visions of Murakami Haruki, to whose work the library is dedicated. It contains 3000 of Murakami’s books translated into 50 different languages and also archive material donated by the writer.