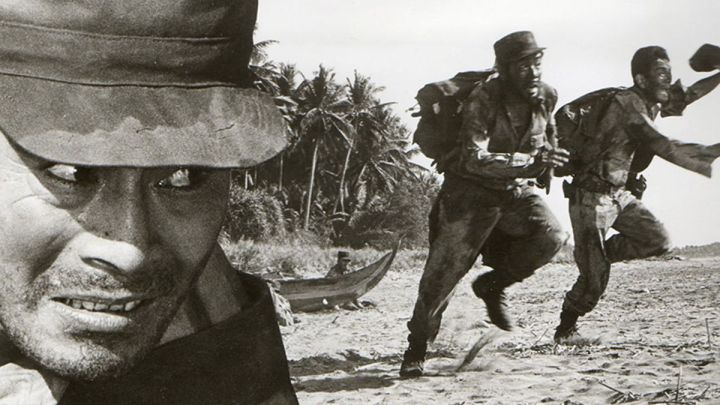 I was pursuing research on Toshirō Mifune, when, by happy coincidence, Carlotta Films released in French cinemas(1) a restored version of Gojūman-nin no isan [The Legacy of the 500,000(2)]. Made in 1963, it was co-produced by Mifune’s own production company Mifune Productions, which had been founded the previous year, and Takarazuka, a branch of Tōhō in Osaka. Mifune plays the lead, taking on the triple task of director-producer-actor. The screenplay was written by Ryūzō Kikushima, who, like Mifune, frequently collaborated with Akira Kurosawa, co-writing the scripts of Stray Dog (Nora inu, 1949), Throne of Blood (Kumonosu-jō, 1957), Yojimbo (Yōjinbō, 1961) and several other films by the great director. Other members of the Kurosawa group supported Mifune’s directorial debut – the actors Tatsuya Mihashi, Tsutomu Yamazaki, Yoshio Tsuchiya and Tatsuya Nakadai, cinematographer Takao Saito, art director Yoshiro Muraki, sound engineer Fumio Yanoguchi and script supervisor Teruyo Nogami. Kurosawa, whose name does not appear in the credits, contributed to the editing and insisted on some additional shots. The film is Mifune’s only venture into directing, a decision which he described as follows: “Unfortunately, I never had the budget that allows for [Kurosawa’s level of] perfection. I [wanted] to grow and improve as an actor, and I was less than happy with [the film]. I decided [from then on] to let the producer produce, the director direct, and the actor act.”(3)

Gojūman-nin no isan is a combination of adventure tale and gangster film. Most of the story is set in the Philippines on the ancient battlefields in the mountains of Northern Luzon, where a group of five Japanese men are looking for a cache of gold abandoned by the retreating Imperial Japanese Army in 1944. This conventional plot is linked to the remembrance of World War II in post-war Japan, a narrative strategy that successfully retains the attention of both viewer and reviewer. The first shots are archive pictures from the war. In the following sequences, the shots of modern buildings and the dense traffic in the streets give insights into a modern Japan which has recovered economically from the disaster of the war. The former soldiers Takeichi Matsuo (Mifune) and Mitsura Gunji (Tatsuya Nakadai) are now successful businessmen, representatives of the rising Japanese post-war economy. Memories of the war establish the link between the two men, who at a dinner in a restaurant recall an earlier occasion when they had dinner in Manchuria during the Japanese occupation. When he returns to the Philippines, Matsuo is continually reminded of the war, an experience he shares with the older men in the group. In a cave, the Japanese adventurers discover the relics of past atrocities – skulls and skeletons of dead Japanese soldiers. They even meet a Japanese man who managed to survive by marrying a woman of the Igorot tribe. The five Japanese men have entered the Philippines secretly, and the fact that they wear military uniforms, pretending to be Japanese-Americans working for the U.S. army, is a further reminder of the war. The other members of the group even call Matsuo “commander” despite his protestations: “Stop calling me commander. I am not a military man anymore.” The plot evolves towards violence and death, with the situation becoming more and more warlike as the men are chased by an unknown enemy in a hostile environment, and survival is their only goal.

Believing that Matsuo, the only survivor of his unit, knows where the treasure of gold coins left by the retreating Japanese troops is hidden, Gunji has no qualms about kidnapping his former comrade. However, Matsuo is unwilling to help him find the gold and it is only when Gunji threatens the life of his daughter that he agrees to participate in the expedition. Gunji represents the ruthless type of businessman whose activities are close to crime. In contrast, Matsuo is depicted as honest and responsible, nursing the feverish Keigo (Tatsuya Mihashi) during the perilous journey and taking care of the young Tsukuda (Tsutomo Yamazaki). His relationship with this rebellious youth is reminiscent of Kurosawa’s Drunken Angel (Yoidore tenshi, 1948) and the conflict-laden relationship in that film between the young yakuza Matsunaga (played by Mifune) and the elderly Dr. Sanada (Takashi Shimura), who wants to rescue him from his criminal lifestyle. Like Sanada, Matsuo believes in humanity and tries to convince the cynics Tsukuda and Keigo that no human being is completely evil. Mifune’s natural charm reinforces his portrayal of this character perfectly. As in Kurosawa’s The Bad Sleep Well (Waru yatsu hodo yoko nemuru, 1960), his role is that of an ordinary man, and far from being a superhero as in Yojimbo, he is nevertheless a courageous man whose experience and knowledge of the unknown territory is vital for his team.

The search for the cache of gold is the starting point of the adventure, which despicts an inner journey in which the present joins the past – a past which still lingers. Matsuo admits that he has forgotten the war, but by retracing the route taken by his soldiers back to the hiding place, memory becomes overwhelming. He is reminded of the horror he experienced in the “Valley of Death”, and this becomes once again a presence, which he describes in vivid terms, the close-ups of his face revealing Matsuo’s inner torment. His memory of past violence is an indicator of the gap between the generations, and Tsukuda is annoyed by the war stories of the older members of the group. Matsuo cannot accept the young man’s claim that the chaos of the post-war years was the worst anyone could experience, insisting that these years were nothing compared to the horror of the war.

Memories of war are clearly focused on the Japanese losses. The victims of the Imperial Japanese Army are referred to only once, when Matsuo warns his companions of the Igorot, whose villages were plundered by the Japanese during the war(4) The film’s title – The Legacy of the 500,000 [men] – reveals that its main concern is with the legacy (isan) of the soldiers, namely the 500,000, who perished in the Philippines. Mifune’s film is part of a series of Japanese war films made in the 1950s and 1960s which re-establish the figure of the Japanese soldier by humanizing it. In films such as the great box-office success Attack Squadron! (Taiheyō no tsubasa, Shūe Matsubayashi), released the same year as Gojūman-nin no isan, or Retreat from Kiska (Taiheiyō kiseki no sakusen: Kisuka, Seiji Maruyama), released two years later, Mifune plays characters who are courageous and with whom the viewer can identify – men and officers eager to protect the soldiers under their command or determined to rescue the Japanese unit left on the remote island of Kiska.

Gojūman-nin no isan is in accord with a memory culture concerned with salvation, a prominent topic of Japanese cinema in the early 1960s. But are there such things as “good” or “bad” memories? Western criticism often points a finger at the way Japanese seem oblivious to the atrocities committed by their military during the war in China, the Pacific, and South East Asia, including the Philippines. However, such criticism is surely as one-sided as the attitude it targets. Isn’t it too simply to put the blame on Mifune, whose memory can only be selective? The film is first of all a vehicle for his heroic star image, and it was something of a surprise that Mifune also directed it, which was coincidental rather than a deliberate choice.(5) However, behind this there is surely the personal concern of a man who was drafted at the age of nineteen in 1939, and who was left six years later with his own remorse, anger and wounds. As for many of his fellow Japanese, the war was for him a traumatic experience which could not be ignored that easily.(6) Gojūman-nin no isan highlights the relationship between the living and the dead when Matsuo, his body stiffened under the weight of his grief, states: “I simply feel responsible for being alive.” And perhaps Mifune felt the same way, with patriotic feelings but also deep concern. Refiguring the past from his individual viewpoint and experience,(7) it is his way of mourning which lingers under the more spectacular surface of the narrative. In a rather humble manner, the film is part of the “multivocal struggle over national legacy and the meaning of being Japanese”(8). The violence which the actor or and many other soldiers of the Japanese Imperial Army suffered is an undeniable part of war memory and serves as a reminder for a society which is distancing itself more and more from its violent past. Gojūman-nin no isan makes critical reference to a materialistic society by exploring human behaviour and by targeting greed through the tale of the ill-fated expedition. An adventure film thereby turns into a moral tale about the human condition. The ambiguous figure of the American who pulls the strings behind the scenes represents the winner in the war and the political and economic power which continues to influence Japanese post-war society, a power as invisible as the man himself. The motivation of this enigmatic American remains unclear, and having killed Matsuo and his team and taken the booty, he says: “Now I can finally go home.” Is his aim not simply material gain but also a final act of revenge? Or is he the ultimate winner who takes all? The ending is abrupt, but it nevertheless reveals the futility of violence as its central theme. The death of the five men in the jungle, their unidentified corpses scattered on the empty beach in a foreign country within sight of their ship (ironically called “Hope“) has nothing heroic about it. It points to the meaninglessness of the war deaths. It seems that salvation is only possible in death, but even then is an illusion, for the past cannot be suppressed.

3)Quoted from Stuart Galbraith IV, The Emperor and the Wolf: The Lives and Films of Akira Kurosawa and Toshiro Mifune, New York/London, Faber & Faber, 2002, p. 368-369.

4)There is some ambiguity about the treasure known as “Yamashita’s gold” and named after General Tomoyuki Yamashita (1885-1946), who led the Japanese forces during the invasion of Malaya and the Battle of Singapore. He was given task of defending the Philippines, occupied by the Japanese, from the advancing Allied forces in 1944, and fled with his Area Army to the mountainous region of Northern Luzon. There is no proof of the existence of the treasure, which is supposed to have been the loot of the Imperial Army from various campaigns in South East Asia. The film, however, refers to “Yamashita’s gold” as a cache of gold coins minted and shipped from Japan to stabilize the peso (the Philippine currency) in 1942. (See Galbraith, op. cit., p. 365 and Teruyo Nogami, Waiting on the Weather: Making Movies with Akira Kurosawa, Berkeley, Ca., Stone Bridge Press, 2001, p. 244). This version makes Matsuo’s wish to return the gold to the families of the dead Japanese soldiers morally understandable.

7)Mifune had no experience of the front. He was first sent to Manchuria, assigned to the film unit of the 7th Flying Squad of the so-called Kwantung Army. In 1941, he was transferred to the 8th Flying Squad’s educational department. When the Japanese troops retreated, he was sent to Yokkaichi, in Mie Prefecture. During the last months of the war, he was stationed at Kumanosho air base on Kyushū Island where he had to serve the last sake to departing kamikaze pilots. In several interviews he recalled how often he was beaten because of his rebellious character or simply because his deep voice did not please his superiors.